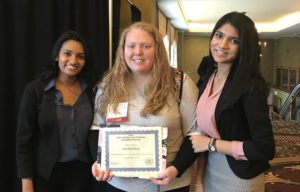 A number of individual honors were also awarded to YMCA of Greater Monmouth County delegates, and Ashley Biddle, Civic Engagement Program Coordinator, was awarded the Gail C. Jochen YMCA Values Award, an annual honor given to an advisor who demonstrates dedication to youth development and the values of the Model United Nations (Model UN) program.

YMCA of Greater Monmouth County was represented by over 160 delegates at the conference, which was attended by 2,000 students in grades 6-12 from across the Mid-Atlantic region. Delegates gather annually to research, discuss and debate prominent global issues.

Hosted by the YMCA of Greater Philadelphia, conference delegates were assigned a country to research and worked together to write and present resolutions. Aside from increasing awareness of international affairs, delegates refined their debate and public speaking skills while building confidence and making new friends over the course of the weekend.

“We are proud of the great achievements of our students and their leaders at this year’s Model UN conference,” said Laurie Goganzer, president and CEO of YMCA of Greater Monmouth County. “The Y is committed to fostering an understanding of world issues and to developing global citizens that can lead the next generation with peace and diplomacy.” 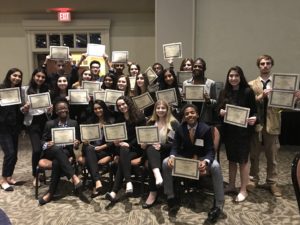 Sarah Cohen, a junior at Freehold High School and three-year participant of the program, was re-elected by her peers to serve at next year’s conference as the Chief Justice of International Criminal Court-A (ICC). Delegates in ICC examine historical figures and determine if they are innocent or guilty of the crimes they are charged with under the Rome Statute.

Raymond Faiella, a sophomore at Red Bank Regional High School, was elected to serve as the Chair for Council on Economic Advancement-A in 2021. Students who are elected chairs work with Y leaders throughout the summer and fall to prepare committee topics and activities for the winter conference.