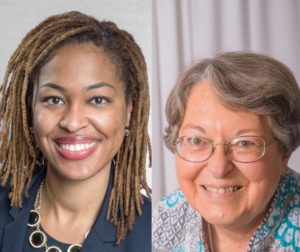 SHREWSBURY, NJ – The YMCA of Greater Monmouth County (the Y) is preparing for its 33rd community celebration of the life and legacy of Dr. Martin Luther King, Jr. on Friday, Jan. 14, 2022. The annual commemoration will be a virtual event, free and open to all.

A highlight of this year’s celebration will be the presentation of the Dr. Martin Luther King Jr. Human Dignity Award to honor an individual who reflects the civil rights leader’s principles and ideals in both philosophy and action. Rabbi Sally J. Priesand, who was the first female to be ordained as a rabbi in the United States, is this year’s recipient of the YMCA’s prestigious award.

Priesand is president of the Board of Trustees at Interfaith Neighbors, an organization that provides affordable housing solutions, rental and mortgage assistance and other vital support services for families and individuals in Monmouth County. The nonprofit was founded in 1988 by interfaith groups to combat homelessness in Asbury Park and other communities in the county and developed into a full-service agency providing a lifeline of services for the working poor.

“I am honored to receive an award named for Dr. King, especially since it comes from my local community,” Priesand said. “It is a reminder that all people are part of one human family, all of us God’s children, all worthy of dignity and respect.”

For 25 years, Priesand served as rabbi at Monmouth Reform Temple in Tinton Falls, retiring in 2006. She was given the title rabbi emerita and is still involved at the temple with various events and activities.

Y President and CEO Laurie Goganzer said the YMCA of Greater Monmouth County is looking forward to formally recognizing Priesand’s social justice work in Asbury Park and throughout Monmouth County. “She represents the true spirit of Dr. King, and we want to bring the community together to celebrate and honor his memory, which lives on in Rabbi Priesand’s humanitarian efforts.”

Priesand is also a former chair of the membership committee of the Center for Holocaust, Human Rights and Genocide Education (CHHANGE) at Brookdale Community College. She is an active supporter of the Jewish Heritage Museum of Monmouth County and has worked with Planned Parenthood locally and nationally.

An ordained rabbi since 1972, Priesand holds a Bachelor of Arts in English, a Bachelor in Hebrew Letters, and a Master of Arts in Hebrew Letters. She was awarded an honorary Doctor of Humane Letters from Florida International University, and an honorary Doctor of Divinity degree from Hebrew Union College – Jewish Institute of Religion. She is a nationally recognized published author and contributor to books on Judaism and women’s roles in Judaism.

Among many of the honors Priesand has received, she was recently one of 20 women honored by the Jewish Women’s Archive and the UJC National Women’s Philanthropy in conjunction with the exhibit “From Haven to Home” at the Library of Congress in Washington, D.C. In 2009, she received the Elizabeth Blackwell Award from Hobart and William Smith Colleges, the Distinguished Alumni Award from the McMicken College of Arts and Sciences at the University of Cincinnati and the Myrtle Wreath Award from the Southern New Jersey Region of Hadassah.

In 2010, in honor of its 125th anniversary, Good Housekeeping Magazine named her one of 125 women who changed our lives and our world. In 2013, Priesand was honored by the Center for Holocaust, Human Rights and Genocide Education (CHHANGE) at Brookdale Community College at its annual awards dinner. In 2017, the Women of Reform Judaism established the Rabbi Sally J. Priesand WRJ Award to be given annually to a graduating woman on the Cincinnati campus of HUC-JIR.

“Rabbi Priesand has dedicated her career to helping others,” said Michael Wright, a Y board member and chairperson of the MLK Committee. “She is a pioneer in reform Judaism and a bonafide leader in the nonprofit community of Monmouth County. Our community is blessed to have Rabbi Priesand give of herself to so many important causes. She is part of the modern progressive movement to keep Dr. King’s dream alive and advance his philosophy of social justice.”

As part of the program, the two winners of the annual Dr. King student essay contest will read their winning essays. Both students will be awarded a $1,500 scholarship, which is sponsored by Hackensack Meridian Health, New Jersey Natural Gas and PorterPlus Realty. They will also receive a full year membership to a YMCA of Greater Monmouth County branch of their choice.

The keynote speaker at the MLK event will be Andrea McChristian, Law & Policy director at the New Jersey Institute for Social Justice. Ms. McChristian oversees the Institute’s three pillars of social justice: democracy and justice, economic justice, and criminal justice reform.
Goganzer said she encourages the community to join the virtual commemoration and thanks the volunteer committee that has “worked so hard to organize this important event.”

The online event will take place from 8-9 a.m., Friday, Jan. 14. To register or to learn more, visit www.ymcanj.org/MLK.

About YMCA of Greater Monmouth County
YMCA of Greater Monmouth County is here for all – to empower youth and teens, improve health and strengthen community. A leading nonprofit charity, the Y unites 36,000 people of all ages, incomes, and backgrounds. During the pandemic, we responded to vital community needs, providing more than $735,000 in relief services. Our life-changing programs and services are anchored in 10 communities: health and wellness facilities in Freehold Township, Old Bridge and Red Bank; outdoor day camps in Millstone and Wall; a community center in Freehold Borough; counseling and social service centers in Eatontown, Matawan and Middletown; childcare centers in Freehold Township, Matawan and Red Bank; and integrated in nearly 100 schools in Monmouth and Ocean counties. We’re based in Shrewsbury, NJ. Learn more at www.ymcanj.org.